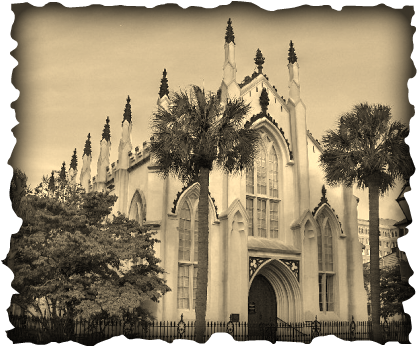 A History of the Huguenot Church

The Huguenot, or French Protestant movement, was a major force contributing to the evolution of the European Protestant Revolution. The harsh persecution of the Protestants by the French Catholic Court resulted in their migration to foreign lands in Europe, South Africa and the Americas.

By the late 17th century, Huguenots had settled in New York, Philadelphia, and other Eastern coastal areas. These early groups were greatly augmented when Louis XIV caused the Edict of Nantes to be revoked in 1685, thereby divesting French Protestants of all religious and political prerogatives. The English were happy to encourage these refugees to settle in the colonies, most of whom were representative of France’s prosperous merchant and professional classes.

In April of 1680 the ship Richmond arrived in Charleston with 45 French Protestants (Huguenots) aboard. More refugees followed, and in 1687, a church was built on what is now the corner of Church St. and Queen St. in downtown Charleston. About four hundred and fifty Huguenots had settled in the Low Country of South Carolina by 1700.

The original church was destroyed in 1796 in an attempt to stop the spread of a fire, which had burned much of the surrounding area. The replacement for the original building was completed in 1800 and dismantled in 1844 to make way for the present Gothic Revival edifice, designed by Edward Brickell White and dedicated in 1845. The church was damaged by shellfire during the long bombardment of downtown in the War Between the States and was nearly demolished in the severe earthquake of 1886.

When the building was completed in 1845, the church also purchased and installed a tracker organ carved in the style and shape of a Gothic chapel. Its keys are connected with the pipe valves by a wooden “tracker’ or mechanical linkage which responds to the organists touch faster than any modern mechanism allows. Its tone is similar to the Baroque organs for which Bach and Handel composed. It was built by the leading American organ builder of the first half of the nineteenth century, Henry Erben. After the fall of Charleston in 1865, federal soldiers dismantled the organ and were loading it on a New York bound ship when the pleas of the organist, Mr. T.P. O’Neale, and some influential friends saved it.

Today, the services are no longer in French except once a year, and worshipers no longer arrive in boats as they did when this was known as “The Church of the Tides.” However the church is alive and well and growing in both membership and program. Attendance is at an all time high. The church boasts a varied congregation made up of young single people, traditional families with children as well as mid-life and senior members. Although there are members who are descendants of French Huguenot families, being of Huguenot descent is not a requirement for membership.

The Huguenot Church of Charleston is independent and is not affiliated with any governing church body. We see this as an advantage in a time of intradenominational strife. The church shares many historical links to the Presbyterian Church (Church of Scotland), the Dutch Reformed, and Lutheran Church by virtue of its early leadership under John Calvin. Calvin’s Institutes of the Christian Religion published in 1536 form the historic basis for the formation of these “Calvinist” denominations. The French Protestant (Huguenot) Church is perhaps least known among them. This may be attributed at least in part to the tendency of Huguenot immigrants in the American Colonies to assimilate into their communities and their intermarriage into families who were practicing Anglicans, Presbyterians, Congregationalists, etc. So, the Huguenot Church of Charleston is unique. It is a living remnant and reminder of the Huguenot experience here in South Carolina.

Our Sunday worship follows the original Liturgies of Neufchatel and Valangin with prayers, music, scripture readings and sermon included in a traditional context. Communion is served the 1st Sunday of every month at the altar rail.

Worshipers of all Christian backgrounds are welcome, and the church attracts a large number of visitors owing to Charleston’s vibrant tourism. In addition, the Sunday worship is followed by a light meal known in the church as the collation. Wine is served in the French tradition.

The collation remains a firm commitment of the church to its tradition of fellowship and welcoming hospitality for which Huguenots are known.